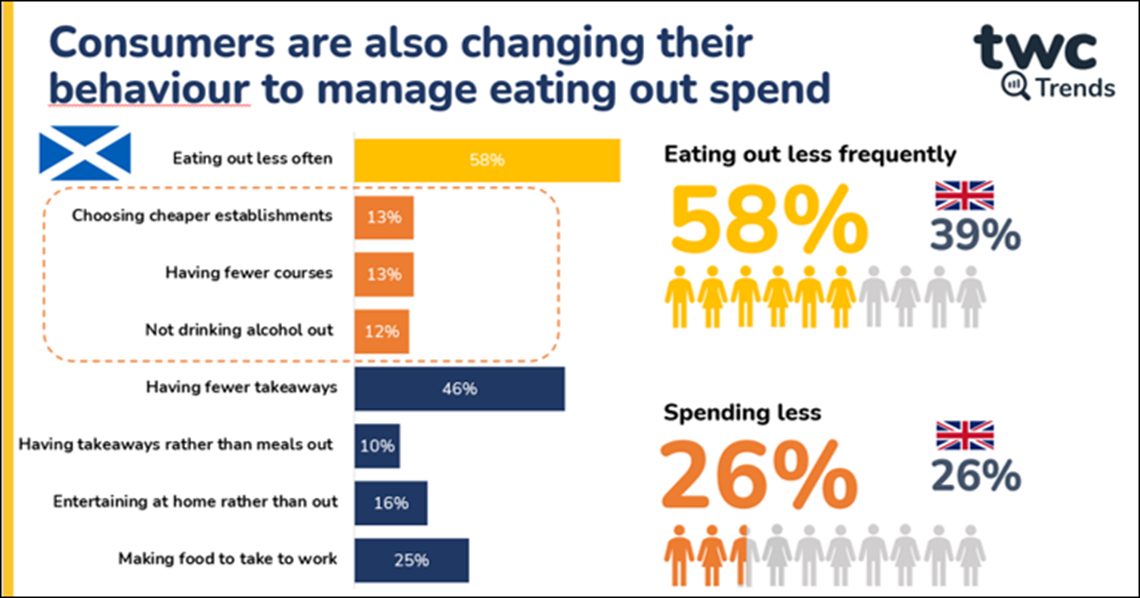 New research from digital and data experts TWC in collaboration with the Scottish Wholesale Association (SWA) has revealed that two-thirds of Scottish consumers are having to reduce their spending to pay their bills. Consequently, cutbacks are being made including reduced treats, trading down on groceries and reducing the frequency of meals out of the home.

The TWC Trends research was conducted in June 2022 and showed that 66% of Scottish consumers agreed that they were having to reduce their spending to pay their bills, with consumers aged 35-54 and households with children most likely to be feeling the pinch. Scottish consumers were also more likely to agree with this statement than those living in other regions of the UK, with the nationally representative UK sample coming in at 53% agreement.

Consumers reported that they are making cutbacks across both grocery and discretionary spending. The top tactic (with 63% of Scottish consumers agreeing they are doing this), was the reduction in treats. Trading down by buying cheaper groceries was next, with 57% agreement. Overall, 81% of Scottish consumers were using one or more tactics to reduce their grocery spending.

“Scotland has always had different consumer purchasing habits and trading patterns to the rest of the UK. It’s important that SWA, as the industry trade body for wholesale, continues to help our members and the sector understand what’s happening in the trade and with wider consumer behaviour.

“Working with TWC this research will help wholesalers look at where they should be focusing their efforts, looking at stock ranges and price points and how they assist the end-users adapt to the evident change in consumer purchasing habits”.

A full update of the Scottish research findings will be presented at a SWA ‘Scottish Cost of Living Breakfast Briefing’ webinar on Thursday 18th August, 9am-9.30am. Registration can be made here: surveymonkey.co.uk/r/JBZZSCT.