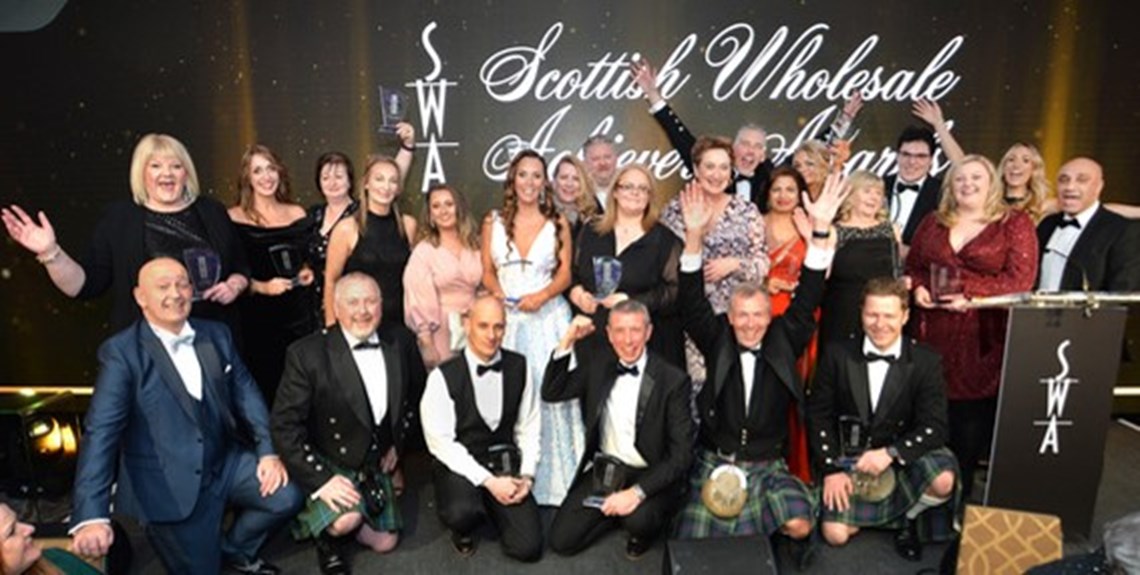 SCOTLAND’S most resilient and innovative wholesalers have been recognised and rewarded by the industry at the annual Scottish Wholesale Achievers Awards.

Achievers, now in its 19th year and organised by the Scottish Wholesale Association, recognises excellence across all sectors of the wholesale industry and the achievements that have made a difference to individuals, communities and businesses over the last two years.

Over 400 people attended the Achievers gala dinner and awards presentation, hosted by TV presenter Amy Irons, at the Sheraton Grand, Edinburgh on Thursday, 10 February with the Cabinet Secretary for Finance and the Economy, Kate Forbes, joining the celebrations and presenting the Rising Star of the Year award, won by Meghan Henderson of Lomond Foods.

A further 16 categories were up for grabs across retail, foodservice, licensed, technology and community-focused sectors.

Achievers also shone a spotlight on the people who play such an integral part in the success of wholesale and supplier businesses with awards for wholesale Employee of the Year, Rising Star of Wholesale, and Supplier Sales Executive of the Year – with the wholesaler deemed Great Place to Work also recognised.

Wholesalers had an opportunity to impress the judges with their Best Business Initiative and outline their efforts in making their businesses more sustainable in the Green Wholesaler of the Year category.

Suppliers were rewarded for Best Overall Service and Outstanding Achievement while foodservice suppliers were judged for the Best Foodservice Supplier category.

Lomond Foods, also based in Glasgow, raised the roof for Meghan Henderson who won the Rising Star of Wholesale category. It also claimed the top prize in the Best Delivered Operation – Foodservice.

For Wick-based Sutherland Brothers, the long drive down to Edinburgh from the Highlands was made all the sweeter when the Sutherland family collected the Best Licensed Wholesaler accolade.

While wholesalers already know that their industry is a great place to work, the official category – Great Place to Work – was claimed by Glasgow’s Faílte Foodservice.

Celebrating the support of suppliers to the wholesale industry and recognising the great people who work for them, Achievers crowned Hazel Boyd of Heineken UK the Supplier Sales Executive of the Year.

And in a double whammy for AG Barr, the soft drinks firm won both the Best Overall Service and Best Foodservice Supplier categories.

Meanwhile, Millers Larder won a new category – the Outstanding Achievement Award – and Best Advertising Campaign went to Tennent’s Lager for its ‘Don’t Worry England. We Bottle It Too’ campaign.

Colin Smith, SWA chief executive, said: “As well as shining a spotlight on the efforts of Scotland’s wholesalers, our awards recognise the lengths that suppliers and their employees have gone to in supporting their customers and communities during the pandemic.

“That is one of the reasons why these Achievers awards attracted such a high number of entries, both from our longstanding members and from many of the 35 new wholesalers that joined our Association during the pandemic.

“At our last Achievers, in 2019, I spoke about how the industry was witnessing unprecedented change – little did I know that the most unprecedented disruption and change was waiting in the wings.

“But we have worked together as an industry, and the SWA took the lead in fighting for recognition of the impact on our sector, and for equality and fairness in recompensing our members for their losses, ensuring that the Scottish Government recognises wholesale’s key role in the food and drink supply chain.

“It is often said that success is hard won in challenging times and tonight that speaks for itself and we celebrate and acknowledge the resilience and perseverance of our wholesaler and supplier members.”

Rising Star of Wholesale, sponsored by SWA and Capita

Supplier Sales Executive of the Year, sponsored by Unitas Wholesale

Green Wholesaler of the Year, sponsored by JTI

Winner: Tennent’s Lager – Don’t Worry England. We Bottle It Too

Employee of the Year, sponsored by KP Snacks